An air source heat pump (ASHP) is a highly efficient device that harnesses the free low-grade energy from its surroundings and delivers this as useful heat energy. Air source heat pumps also provides cooling in the summer months.

Solwat Air Source Heat Pumps offers the most cost effective and eco-friendly way of heating your home. With this heating solution there is no need for the costly replacement of boilers pipework or tanks. The heat pump installation is a relatively speedy procedure involving minimal disruption yet offering maximum benefits. 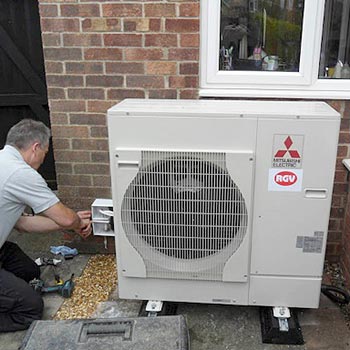 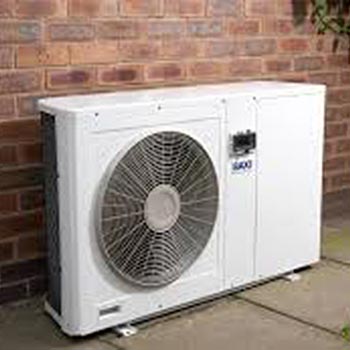 Why should I choose an air source heat pump?

The most efficient gas boilers claim efficiency of up to 99%. This is for the combustion of gasses only, not for the usable heat delivered – which is considered to be around 70%. Conventional electric heating, though more efficient (in the region of 98%) is perhaps the most expensive and creates huge amount of greenhouse gasses during production.

In comparison, heat pumps operate with coefficients of performance in excess of 4:1. This means that for each unit of energy used, FOUR times as much is delivered in heat – keeping your home warm for a whole lot less! You can even combine your heat pump with a Solar PV system and heat your house for FREE!

How does an air source heat pump work?

An Air Source Heat Pump works like a fridge in reverse. It takes energy from the air around you and, using a system of heat exchangers and compressors with a refrigerant, it multiplies this up to heat enough hot water for your heating systems and hot water taps.

Air is pulled over a series of fine coils by a finely balanced fan unit. The coils contain a liquid refrigerant which absorbs the heat from the air. The refrigerant boils at -24°C so, even if the air outside has dropped below -10°C during a cold snap, it will still be warm enough to make the refrigerant boil.

The vaporised refrigerant is compacted using a compressor. This creates hot gas, up to 100°C, which is used to heat the water contained in the thermal store via a heat exchanger.

The efficiency of an air source heat pump varies as the outside temperature changes. Overall, we would expect most systems to generate 3.5kW of heat for every 1kW of electricity used, creating an average Coefficient of Performance (COP) of 3.5. indicating that they deliver 3.5 times more thermal energy than they consume in terms of electrical energy. Coefficient of Performance measures the ratio of heat to electricity and is the standard measure used to describe the efficiency of a heat pump.

For more information on the many advantages of owning a heat pump, see our Benefits page.

Solwat ground source heat pumps extract heat from the ground using pipes that are buried underground, typically in your garden. The pump circulates a mixture of water and antifreeze around a loop of pipe, called a ground loop. Heat from the ground is absorbed into the fluid and then passes through a heat exchanger into the heat pump.

Even in winter the ground stays at a constant temperature under the surface, so the heat pump can be used throughout the year. The length of the ground loop depends on the size of your plot and the amount of heat required to heat your home.

This heat can be used to heat radiators, underfloor or warm air heating systems and the hot water in your home all year round. 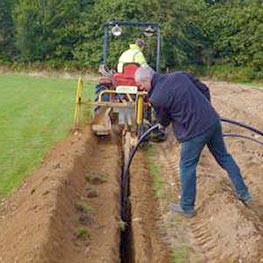 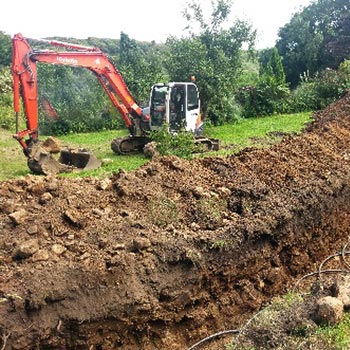 How does a ground source heat pump work?

A ground source heat pump circulates a mixture of water and antifreeze around a loop of pipe, called a ground loop, which is buried in your garden.

The heat from the ground is absorbed into the fluid and then passes through a heat exchanger into the heat pump.
The ground stays at a fairly constant temperature under the surface, so the heat pump can be used all year round.

1. The collector loop is placed under the ground in a parallel array, similar to an underfloor heating system, or via a vertical bore (also known as a borehole). A mixture of water and antifreeze is pumped through this. As the liquid flows through the underground pipes, it picks up the temperature of the earth around it, typically returning to the heat pump at about 6°C. This temperature remains fairly constant throughout the year, which is why ground source heat pumps provide such an efficient means of heating, even during very cold winter conditions.

2. Once back at the heat pump, the liquid is passed against a heat exchanger. On the other side of the heat exchanger is a refrigerant. This refrigerant boils at -24°C, so 6°C is plenty to make it boil rigorously.

3. The now gaseous refrigerant is squashed back down using a compressor. Whenever you squash a gas you force it to release energy.

For more information on the many advantages of owning a heat pump, see our Benefits page.

Solar thermal panels are not to be confused with solar panels, which use the energy from the sun to generate electricity. As such, solar panels and solar thermals are two very different technologies.

Using solar energy has many advantages, among them the money saved on energy bills, the reduction of your carbon footprint and the low maintenance, making solar thermal a great investment.

How does solar thermal work?

A solar thermal system uses the energy from the sun to heat up water to use in the home.

The way a solar thermal panel works is quite simple: it absorbs the heat from the sun with panels and transfers the heat to your hot water system.

The installation process
We want to ensure that your experience with us is easy and enjoyable. We use our own highly skilled, certified engineers to install and commission our systems. We are also happy to work closely with any third party plumbers or other contractors involved.

More detailed assessment - including heat loss calculations and energy performance certificate (EPC). You will then receive a final quote pack.

To be signed and deposit paid.

Booked in advance and carried out by a professional team of experts to a high standard.

Sit back and enjoy

A warm home and claim your RHI (Renewable Heat Incentive).

As a heat pump does not involve any form of combustion, it should last much longer than a traditional boiler and will require less maintenance than other renewable alternatives.

We would expect an air source heat pump to last between 15 to 20 years and a ground source system to last more than 30 years. An average condensing boiler is likely to last only seven to 10 years.

We are always on hand to provide any aftercare support required. We also recommend that your heat pump system is checked by us each year.

Our servicing/maintenance will ensure your system is always running as efficiently as it should, for a very long time. So, you can sit back and relax.

Ready to get started?